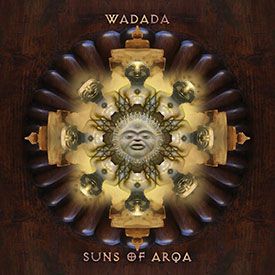 SUNS OF ARQA the end of an era:

Musical shaman MICHAEL WADADA has announced with deep regret but heart felt gratitude to all who have been part of this incredible sonic journey, after nearly four decades of surviving the dark forces of the BabyLondon music business that the SUNS OF ARQA mission is now complete. What started as a musical vision for WADADA, while on a road trip to visit legendary reggae artist PRINCE FAR-I in Kingston, Jamaica, has blossomed into his solo voyage, establishing a spiritual-political movement in the Highlands of Scotland, and releasing his new album on the Belgium label ‘Tracks and Traces’ (Footprint 201502). Which kicks off with a storming ‘radio friendly’ mix of ALL ALONG THE WATCHTOWER by legendary UK producer John Leckie (Stone Roses, Paul Simon, Muse, Radio Head). While a live version of ALL ALONG THE WATCHTOWER captures the spirit in full force and promises a show not to be missed!

Wadada had to personally sing this song to Sir Paul McCartney ,to ask permission to record it, Paul said"cool"

WADADA is paving the way to higher ground and open to all those who want to come along for the ride. The album is a tribute to all the musicians who have been part of SUNS OF ARQA and features several classic tunes from their past catalogue, along with the new!

A quote by: Katy Hallowell a freelance writer and producer , says it all

“I wanted to reach out with the hope that I could learn through Wadada, personally, the nature of and inspiration for the inimitable music he has been creating for decades. I’ve been digging, deep into the internet to find out more about the man who has been the brain and creative energy behind a collaboration of some 200 musicians globally—an anomaly in the music world of todays generation—that I believe deserves recognition. I’m hopeful that, no matter who receives this email, will recognize that Wadada should be exposed to a larger audience, focusing on the rarity and idiosyncratic form and sound of his music.“