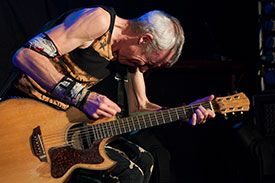 TV Smith was founder member, singer and songwriter for the Adverts, who formed in late 1976, and became one of the leading bands in the first wave of British punk rock. In early 1977, they per­formed regularly at the newly-opened Roxy Club in London, and gained cult success with the Stiff Records single "One Chord Wonders." Their next release, "Gary Gilmore's Eyes" became a hit record, leading to many radio and TV appearances and extensive media interest. A further single, "No Time To Be 21," also entered the charts, and the band spent the rest of the year playing live, including major tours with The Damned and Iggy Pop. The album that followed in 1978, "Crossing the Red Sea with the Adverts," is still considered a genuine classic of the era and was recently named by Henry Rollins as one of the twenty best punk albums ever released.

The Adverts released one further album, "Cast Of Thousands," before their split in 1979. Slammed by the critics at the time, the album was re-released recently on Fire Records to universal acclaim, and described by Mojo magazine as "the long lost punk album that rivals The Clash's 'London Calling'." Immediately after the break up, TV formed TV Smith's Explorers, who achieved a U.K. hit in 1980 with the single "Tomahawk Cruise" and released one album, "Last Words Of The Great Explorer" a year later.

Lack of commercial success led to the band being dropped by their record label and their subsequent split. TV re-entered the live arena in 1986 with Cheap, before performing his first gigs as a solo artist in the early 90's. He has gone on to release a succession of critically-acclaimed albums, including "March Of The Giants" (1992), "Immortal Rich" (1995), "Generation Y" (1999), "Not A Bad Day" (2003), "Misinformation Overload" (2006), "In The Arms Of My Enemy" (2008), and "Coming In To Land" (2011 ). He has also been involved in a number of collaborations with other bands, most notably with German superstars Die Toten Hasen, who performed as TV's backing band on the album "Useless."

At the request of his fans, in 2013 TV released "The Acoustic Sessions," an album of solo performances, recorded live in the studio with renowned producer Jon Caffery. Vive Le Rock magazine called it "an album that sits alongside the Angry Brigade output of Pete Townsend, Roger Waters and Lou Reed, but hits you with the wallop of bare knuckle punk." Late 2014 saw the release of a new TV Smith album entitled "I Delete," his sixteenth as a solo artist, which has been acclaimed by critics and fans alike.

Fiercely independent and determinedly embodying the original spirit of punk rock, TV continues to tour the world, bringing his epic solo show to ever-increasing audiences. Remarkat:, y, he plays his concerts without a setlist and every performance contains a different selection of songs chosen on the night. He plays more than 120 gigs a year and has performed all over Europe, as well as the USA, Japan, Australia, South America, Russia - and even Heligoland.

Not content with playing live, TV has also has written about his on-the-road experiences in five books of highly popular Tour Diaries, described by "Sandman" and "American Gods" author Neil Gaiman as, "hilarious, honest and incredibly true." The fifth volume, "Book Of The Year" was published in November last year and contains a write-up of every one of the 130 gigs TV played in 2013.

A full-length BBC 4 documentary on TV Smith titled "We Who Wait: TV Smith & The Adverts" is still available for viewing on You Tube. www.youtube.com/watch?v=fWZgYCsT2uk

Latest news, archives, and a webshop can be found at:

Praise for "I Delete" (TVS Records, 2014):
"Lyrics pin-sharp and his rasping voice dropping truth bombs with no apology" Classic Rock
"A typically fierce set of lyrics set to a bunch of poppy tracks to excellent effect ... a masterpiece of sparse tension" Record Collector
"A classic collection of pop/punk/garage with just a hint of Adverts" Vive le Rock
"Imbued with humanity and a quiet positivity" Louder Than War
" ... another collection of the sort of soul searching, conscience jabbing, heart on the sleeve compositions of sheer quality that we have come to expect from a man regarded by many as one of, if not the, greatest punk lyricist." FATEA
"Songs soar with astonishing singularity, each lyric offering new visions, fresh vistas" Goldmine

January 17th, 1977. Gary Gilmore executed in Utah by firing squad. A petty thief and double murderer, Gilmore had accepted the legal judgement and refused to join in with the appeals of the liberals who had for months been calling for a stay of execution.

The UK media splashed the story across its front pages in a way that smacked more of exploitation than a rational account of the facts. When I read one of these pieces in a discarded newspaper on the tube one morning I gleaned the informa­tion that Gilmore had asked for his corneas to be used for transplant after his death, hardly the request one would expect from the callous, hardened crirrninal he was being portrayed as.
"I don't think the heart would be much good" he reportedly said.

With this glimpse of a complex psychology at work inside Gilmore, I felt the first stirrings of a song. After all, if I'd read about this 'anonymous' transplant in a news­paper, why couldn't someone else - someone just coming round after an eye oper­ation, for example - also read it? How would they feel about the idea that they might be seeing through a murderer's eyes? That would be the story of tlie song, I decided, set as a kind of gothic horror fantasy with shades of Poe and films like 'The Hands of Orlac'. But there was a more important aim: shocked by the insensi­tivity of the way the case was being reported in the tabloids, I planned to be even more insensitive than them and use bad taste to satirise their own tasteless approach to what was in fact a very tragic story.
Punk rock was the perfect platform.
TV Smith.

"1977. A year that changed everything for me. I remember seeing the Advert's performing Gary Gilmore's eyes on Top of the Pops. Loved TV Smith's songwriting. I still do. He's been more than a little influence on me. 23 years later and a chance meeting between us online and i was helping arrange a show in Coventry for a now solo TV Smith. We started recording a collaborative versiom of Gary Gilmore's eyes in my studio. It wasn't the right time for me and the project lay shelved for 14 years ... Until another chance meeting online between me and the old Antler records label boss Roland Beelen. We talked music as we never had the chance to back in the late 80's. We shared a love for the Adverts and i mentioned this long forgotten project. Now lieing in state on obsolete hardware somewhere at the back of my studio storage. It had to be completed. and it has. finally. and we both love it. "Let's do it" ..."

"2014. When I was contacted to do a mix for this project I did remember the Adverts, late ?O's, TOTP, yellow specs and a female bassplayer. Once Martin provided all the recordimgs, we had to decide on a direction the mix should take. The sheer enthusiasm of TV Smith's vocal coming from the studio speakers just pushed the whole thing into place. Yes, I got slightly carried away ... and ended up with 3 mixes. Even the naked pilot acoustic and vocal recording had to see the light of day. So "yeah, let's do it" ..."
KGB.