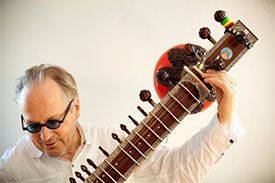 Your new album sees you working again with John Leckie.

Yes after the great work he did with the "Cosmic Jugalbandi" album, at the real world studio, I sent him "Govinda’s Watchtower" which is an ancient vedic chant, (which I recorded in one take at a great little analogue studio in yorkshire) interspurced with Bob Dylans "All Along the Watchtower", he did this great mix that’s the opening track on the new alum released by Belgium label Tracks&Traces on the 30th november 2015.

You've been riding the apex of musical experimentation for roughly four decades now, with your inventions becoming influences for musicians worldwide. How would you compare the musical world you started out in, back then, with what's going on now, and what sorts of exciting new directions do you see music traveling in the future?

Well, its been 35 year’s now. I have not heard much of anything interesting recently. But I really love the old 60’s dance r&b, 70’s dub and hindustani classics from time immemorial. As for the future of music, anything is possible for me personally. I will continue my explorations into sound, both acoustically and through electronic forms… I am interested in the whole sound/body/spirit connection and the power of vibration, an area where there is so much to discover… I think this is the future of music and indeed the human race.

Your albums throughout the years reflect countless fusions of styles and sounds from nearly all corners of the globe. Which musical culture would you feel you draw the most from, and which do you find most intriguing currently?

Still it’s the ancient Indian ragas, which continue to inspire me. But now there are transmissions from outside this world,

I still use sitar for my own meditations, I think the violin can still be out of this world in the correct hands. Also, the sheer power and intimacy of the voice requires attention, it’s so immediate.

One of the more notable moments of your career to many, was your collaboration with Jamaican artist Prince Far I, which, due to his untimely death, many feel never reached full blossom. What is the soas' take on what it was like to work with this other legend?

Great… Prince Far-I was a messenger from Rasta Far-I, whose vocals and inspiration were not of this earth. A truly great artist, I remember playing his last gig with him in manchester shortly before he was gunned down back in Jamaica. We were at a club called band on the wall, and he mesmerized the crowd, like I said he was gifted, those thundering vocals that hit you. I am deeply grateful to have known and worked with Prince Far-I. He was a genius with the spoken word he could take a simple phrase, or even just one word and make it his own, totally transform it from the ordinary to the profound… that was his gift, his magic. In fact, it was while I was travelling round jamaica on a visit to Far-I, that had a higher calling to create ‘Suns of Arqa’: while in Jamaica visiting the legendary Prince Far-I in the late 70’s I had a vision of channeling the idea of ‘one world’ through music. Back in england I formed Suns of Arqa as a platform and vehicle for musicians from all over the world to play together, often spontaneously, to create world music. The tracks we did with him are to be remixed and released on vinyl early 2016.

Modern day technology has reached the point where anyone, of any musical and financial background, can begin creating music, and there is more out there than ever before. How is this changing the world of musical creativity, and how does all this awesome, cutting-edge technology affect the way soa makes music?

For me IT (computer based technology) just makes it harder, in the analogue days it was creative, it was a sonic experience, now it is as if the crystals in the computor are enslaving all of us. I think technology speeds things up but it can be so impersonal. I have plugged in to the internet after some time away and have been put through a whole mental torture! For instance, this is the second interview I have filled in the answers to questions sent by email by a person I have never spoke to. In the past at least we heard each other on the phone or face to face, and could interact, now everything is preparing us, for full take over by the dark forces!

The trials: just to keep going in this crazy time when in the uk there is just no way to keep a live band, it’s pay to play and the whole scene is worse than ever. It’s always a huge loss when some of our fantastic musicians pass on to the other side… God bless the late great: John Snelson on bagpipes; Prince Far-I on vocals; Kendal Ernest on bass; Roly Winn

The good things: having had the opportunity to work with some of the greatest artists and musicians both live and in the studio. To be part of the whole creative process with other people is great… playing live and feeling that huge sense of unity with the audience, is hard to describe, it’s an energy thing. There is also a deeper sense of freedom that comes with being a musician, especially when touring or just travelling around, it’s a great way to connect with people as music is a universal language. I am just greatful that it has all been possible.

We hope we can bring people together as much as possible.